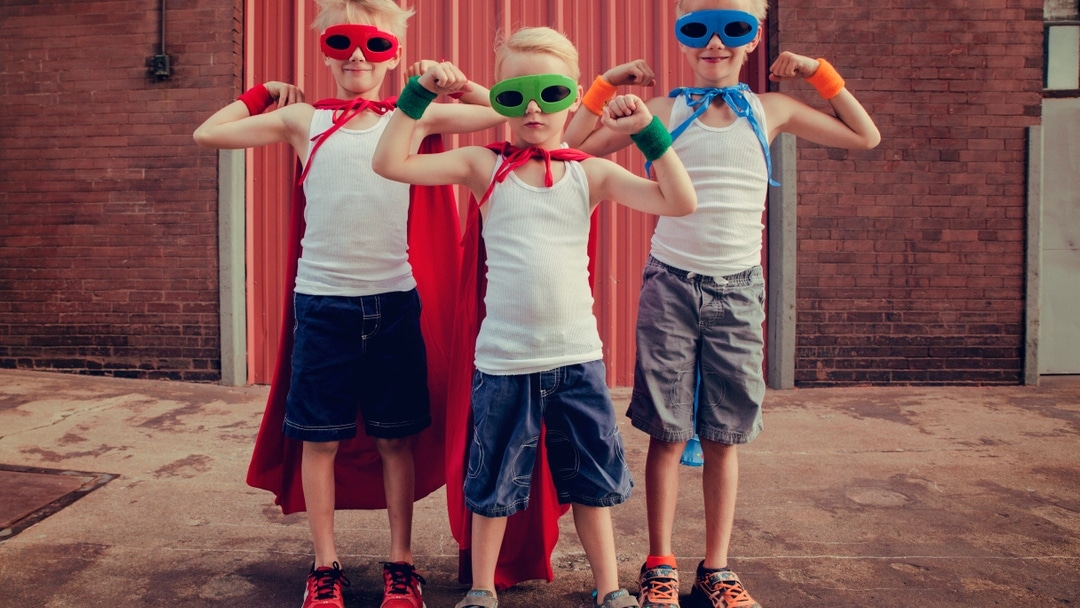 Some of my favorite heroes have a dual identity: Clark Kent is Superman; Bruce Wayne is Batman; Peter Parker is Spider-Man. The list goes on and on. You and I also have a dual identity, though, unlike the comic book heroes, our dual identity isn’t secret. It’s plainly revealed in Scripture, beginning in Genesis 2:7.

The first aspect of our dual identity is the earthly, material one. The NRSV says that “the LORD God formed man from the dust of the ground.” This is an accurate rendering of the Hebrew original, though it misses a crucial play on words. “Man” in Hebrew, is adam (which can mean “humankind,” “male person,” or the name “Adam”). “Ground” is adamah. So God created the man (adam) from the ground (adamah). The earth is not only the place in which we work. It is also a part of us. We belong to the earth. We are made of dust.

Yet this is not the whole story. God not only fashioned us from the earth as a potter makes a pot out of clay. Genesis 2:7 also says that God “breathed into [the man’s] nostrils the breath of life; and the man became a living being.” The word for breath here (neshamah) is reserved in the Bible for God and human beings. In other words, God breathed into the man, not just any old air, but rather God’s own breath, the breath that gives life. The man, though formed from the dust, is also a receptacle of the divine life.

Taken from Mark D. Roberts, Life for Leaders, a Devotional Resource of the DePree Leadership Center at Fuller Theological Seminary.

Envy in The Disney/Pixar Film The Incredibles

Syndrome (formerly called Incrediboy) in the film The lncredibles is one example of envy’s futility and the envier’s inferiority, which together secure the inevitable lack of success in besting one’s rival to which the envier feels doomed. Early in the film, Incrediboy is an ardent but annoying admirer of the superhero Mr. Incredible.

Having been spurned and his inferiority openly acknowledged, he launches on a lifetime’s work of killing off superheroes while at the same time creating a machine that only he, with his superior technological props, can defeat.

He spends all his energy trying to make himself into an imitation-superhero. His plan, as revealed to Mr. Incredible, is simple: perfect the machine, defeat it in a mock battle to win acclaim, and then sell his technology to the masses.

His rationale? If everyone can be “super,” then no one will be. His efforts are shown to be a pathetic failure when he sends his machine to wreak havoc in the city, and his charade of “defeating” it with pseudo-superpowers is exploded for the second-rate fakery it is. No technological imitation can be a real superpower. His position of inferiority cannot be changed, despite his best efforts. His inferiority can only be exposed even more painfully for all to see.

Heroes Depend on Others

People like me, Martin Luther King Jr., and a few others sometimes earn a hero status for things we did during the civil rights movement, but really the daily, faithful acts of ordinary black and white folks made the movement what it was. The many people committed to marching and boycotting—who got no recognition but, rather, rocks thrown at them—were instrumental in tearing down the social walls of segregation.

I am thankful for my chance to be a leader, but I cannot tell my story without acknowledging how much I depended on others. The names of many humble and courageous people might never be known, but the stories I tell are representative of their indelible work. During the mid-1950s boycott in Montgomery, Mother Pollard, an old lady with blisters on her feet, was asked at the end of a march if she was tired. She responded by saying, “My feets is tired, but my soul is rested.”

For the most part, when we think of saints or heroes of the faith, we think of people who are altogether different than we are. They seem to embody a quality of communion with God that is impossible for the rest of us. On closer inspection, we find that most great “saints” are ordinary people who, in the midst of daily living, discover and interact with the reality of God’s presence.

One man like this was Nicholas Herman. His life seemed much like our own. Nicolas had a number of jobs in his life, starting out in the military and then in the transportation industry. After that, he found work in the food service industry, serving as a short-order cook and bottle-washer.

Eventually Nicholas became deeply discouraged by his life. He spent a lot of time, like us, thinking about himself. “Am I saved” was a particular question that burrowed deep into his soul. He struggled deeply with worry, until one day when everything changed. On that day, he was looking at a tree, not the most thrilling exercise, but something occurred to him: what makes a tree flourish is not its self-reliance, but it’s rootedness in something other than and deeper than itself.

With this in mind, Nick began an experiment to have a habitual, silent, secret conversation of the soul with God. Today we know Nick as Brother Lawrence, whose book, The Practice of the Presence of God has become a spiritual classic, continuing to beckon readers to a deeper, more intimate relationship with God 300 years after it was first written.

In imaginary works it is difficult to make virtuous characters as believable and attractive as bad characters. The villains of literature and screen–Captain Ahab, the boys who go bad in Lord of the Flies, Darth Vader, Norman Bates, Hannibal the Cannibal—all are, as a rule, larger figures, more gripping and more memorable, than are the heroes and heroines of even the same authors and producers.

This is as true of religious literature as it is of secular literature. In Paradise Lost, Milton’s Satan has all the good lines, but who remembers a word of his Christ? Dante’s The Divine Comedy is one of the great masterpieces of world literature, yet literary critics as well as college freshmen rarely read The Paradiso, and those who do usually judge its virtue and bliss flat and insipid compared to the gargoyled vices of The Inferno.

There is a good reason why this is so. Human nature stands closer to evil than to good. Intrigue, scheming, and deception are more instinctual to us than love, goodness, and forgiveness. The vices are “first nature,” so to speak, whereas virtue is “second nature,” either a learned response or no response at all.

It is easier to figure out ways to cheat the IRS than to solve the problems of hunger or violence. When we are wronged, we can hatch ten brilliant schemes of revenge; but try to devise even a paltry plan for redeeming a bad situation. Dostoevsky thus had an easier task in creating Raskolnikov, the brooding ax-killer of Crime and Punishment, than he did in creating Alyosha, the only virtuous figure in a family of miscreants in The Brothers Karamazov. This is not to diminish Raskolnikov, he is a powerful figure of darkness and depravity. It is simply to say that it is harder to make Alyosha as scintillatingly good as Raskolnikov is bad. And it is nearly impossible to conceive of a world in which the reverse would be true.

Who is your Hero?

When I ask the high school students at my church to name a celebrity, they can instantly rattle off a list of twenty. When I ask them to say who their heroes are, their response is usually quiet silence with furrowed brows. After they think about it awhile, however, a few name their grandparents as the people they most admire. Their heroes are people whose names aren’t even known in the next town, much less nationwide.