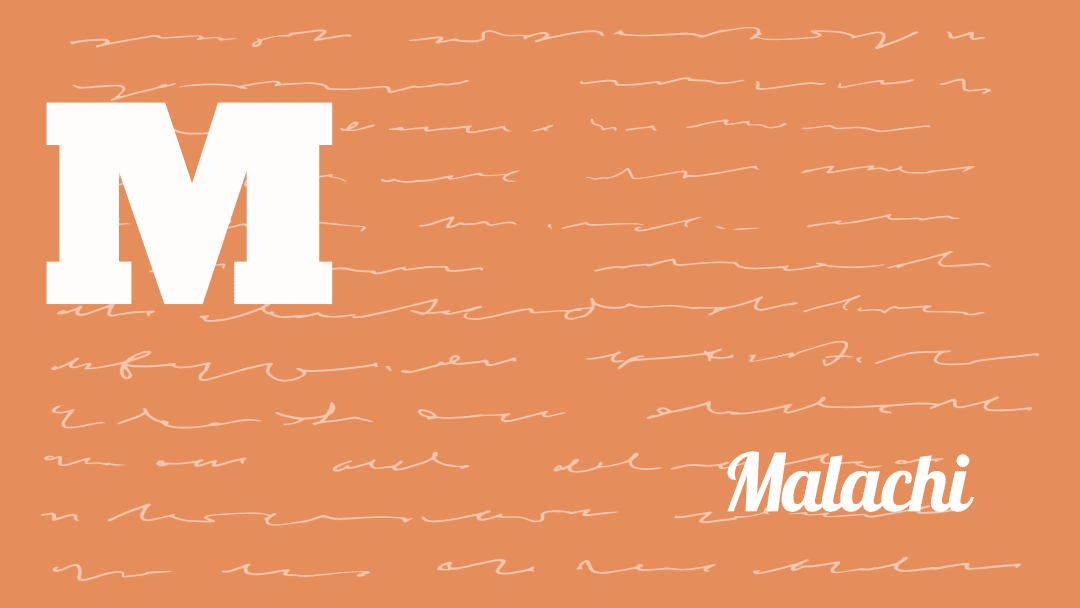 Malachi’s Context: The book of Malachi, the last book in the OT canon, is often dated to some time in the first half of the 400’s BC. This time period is after both the northern kingdom of Israel and the southern kingdom of Judah have been conquered by the Assyrians and the Babylonians. With the Persians in power, the people of Judah were allowed to return. Around the time of Ezra and Nehemiah’s work, Malachi was written. There are varying opinions about more specific timing of this prophecy. For example, Elizabeth Achtemeier, in the Interpretation commentary series places this prophecy as likely before the time Ezra and Nehemiah[i], while David Baker, in the NIV Application Commentary describes the timing of Malachi as after the rebuilding of the wall and the people of Judah have lost their initial passion they had when returning home.

In either of these settings, we find a people who still are in need of hope. They are cynical, questioning God’s presence and faithfulness. And Malachi, who’s name means “My messenger,” is developing a sort of court room case for the people of Judah. There is a series of cases made against God, God makes cases back – all through the perspective of this prophet. Achtemeier makes the claim that Malachi is drawing from Deuteronomic law, where the a priest would hear a court case in the temple. The Judeans will quickly see that while they think God is in the wrong, the tables will soon be turned…

Judah’s Ongoing Refinement: Our passage, verses 1-4 of chapter three, while often used as a part of Advent liturgies, are part of a slightly larger unit. Commentaries often begin the passage in verse 17 of chapter two and will go a few verses later in chapter three. This passage, then, starts with the case of Judah against God. The prophet says God is wearied by Judah’s words. Judah has been claiming that God is absent. The proof of this, say the Judeans is the lack of justice. People who act wickedly seem to get away with it. “Where is the God of justice?” the people of Judah ask.

In short, God’s response to Judah, through Malachi, is who are you to determine justice? Judah should be careful for what they wish. God will send a messenger, and when this messenger comes, it will be like the refiner’s fire. In fact, God will put Judah on trial! The tables have turned. This messenger will make things right, will bring justice, but that justice will also include an accounting for Israel and Judah. Judah has neglected the poor working class, the widows, the orphans, and the aliens. However, even as this messenger brings justice, God is the same faithful God. God will continue to be faithful to the covenant made with his people.

Who’s the Messenger? This passage can be interpreted at various levels. Each of these layers of interpretation add different potential ways of understanding who this “messenger of the covenant,” this Malach in Hebrew, from verse 1 actually is.

Some interpreters read this passage as describing God himself. In this sense, God as the messenger of the covenant, is the same faithful God of the covenant described throughout the Old Testament. The people Judah, who’ve been living as if the God of justice does not exist at all, will actually meet this God. And it will be like the refiner’s fire when the meet the very God they’ve ignored.

Other interpreters view the messenger as John the Baptist, preparing the way for the coming of Jesus. Matthew 11:10 and Mark 1:2 quote this verse from Malachi 3 to make this claim. In this sense, we connect these words to the ministry of Jesus, as described in Matthew 4:17 “Repent, for the kingdom of heaven has come near.” In Jesus, a new kingdom has come, a kingdom where the oppressed are freed, the lost are found, and the blind can see.

There is yet another layer of interpretation to this passage, as well. In this interpretation, the coming “messenger of the covenant” is Jesus in his second coming. The Gospels allude to this image in places like Mark 13 and Matthew 25. In this second coming, Jesus can be viewed as the messenger of the covenant, putting creation to rights, restoring justice.

The Refining Messiah Who Makes All Things New: Seeing Jesus as the messenger of the covenant, we see a portrait of the Messiah who will refine us. As Jesus inaugurated the kingdom of God with his ministry on earth, we await his return to fully establish the kingdom. Before Jesus’ return, through the power of the Holy Spirit, we become more like Jesus. We continue to be refined as we strive to partner with God in his work in the world. We pray for God’s kingdom to come. This is the kingdom described in Malachi 3, where the poor, widow, orphan, and alien are cared for, where there is no adultery, sorcery, or perjury.

This is ultimate trajectory of God’s work in God’s creation. Matthew 25 describes it. Revelation 22 does as well. While we await this coming kingdom, we strive to be like Christ, being refined along the way. The beauty of Malachi three is that the refiner’s fire is not all consuming. We are not completely consumed in fiery wrath. Rather, we are refined, made to look more like Jesus. We are refined in the waiting.

Refined in the Waiting: As we described in the first week of Advent, waiting does not have to be passive. In fact, our waiting shapes us. This passage in Malachi shows us that God is interested in our ongoing transformation. Not only for the people of Judah, we also can claim this passage for ourselves. God wants to do a new work in us. God was us to be a people of justice, and God is faithful to us in the process. We can be refined without being consumed.

During this particular season of Advent in 2021, after almost two years of hearing about large issues in the world around us, how can the individual seek justice and righteousness. How are we each seeking to be refined by our Messiah? We recognize that things are still not as they should be in the world around us. So what can we do as individuals to join with God in making all things new? How can we seek to be more faithful ourselves?

Taking an Honest Look Inward: We may be like the Judeans, looking at the world around us with judgment or contempt. In the days of social media and the 24-hour news cycle, we always hear about issues in the world around us. There are countless opportunities to judge or criticize others – and we certainly do need to hold people to account.

However, this passage reminds us of the need to also look inwardly. The people of Judah complained about the injustice or unrighteousness they saw around them, while ignoring their own issues. How often we hear a sermon, and our first thought is, “Wow, my friend really needs to hear this one!” Do we, though, look also to ourselves?

There has been much talk recently of the Great Recession. In August, 2021 alone, something like 4.3 million people voluntarily quit their jobs, roughly 3% of the total work force in the United States. Additionally the percentages of people who completely stopped attending church in 2020 as compared to 2019 skyrocketed.[i] Roughly 1 in 5 practicing Christians reported having not attended any form of church at all in the past six months in a Barna study from 2020.[ii] Trends like these can make us look at the changes in society with judgment and resentment. “Why is everybody quitting everything?” we might ask. Malachi 3 encourages us to look inwardly – what might we be doing or not doing within the church that makes it so easy for people to quit? What might we need to adjust in order to more faithfully communicated the Gospel and raise up disciples in this time?”

This passage is a humbling one for us, but it is still hopeful. The Messiah is coming to make things right. And while we often think of everything else in world that needs fixing, we’re a part of it! Thanks be to God that God gives us grace, and that God is still faithful to us as we are refined and renewed!

Waiting can be a time that challenges us. It can also spur us on toward new growth and maturity. Our character is further defined while we wait. How is God shaping your character during this season?

There are those who insist that it is a very bad thing to question God. To them, “why?” is a rude question. That depends, I believe, on whether it is an honest search, in faith, for His meaning, or whether it is the challenge of unbelief and rebellion.

Elisabeth Elliot, On Asking God Why: And on Other Reflections on Trusting God in a Twisted World, Revell.

A Wrong Understanding of What This Life is Supposed to Be

The problem sincere Christians have with God often comes down to a wrong understanding of what this life is meant to provide. We naturally and wrongly assume we’re here to experience something God has never promised. More than perhaps ever before in history, we assume we are here for one fundamental reason: to have a good time—if not good circumstances, then at least good feelings.

We long to feel alive, to sense passion and romance and freedom. We want the good time of enjoying godly kids, of making a difference in people’s lives, of involvement with close friends, of experiencing God’s peace. So we invent “biblical” strategies for seeing to it that our dreams come true. We call them models of godly parenting and disciplines of spiritual living and principles of financial stewardship—all designed to give us a legitimately good time. What’s wrong with that? But when we uncover the deepest motives that drive our actions, we discover a determination to feel now what no one will feel until heaven.

… Sometimes all that separates Christians from non-Christians is our understanding of how to produce those good feelings. The pursuit of soul-pleasure remains primary. It continues to be the aim behind our choices rather than an occasional and welcome by-product of a higher aim: the aim of glorifying God as the object of our deepest, most passionate desire.

We continue to want something or someone more than God. We don’t think that’s our biggest problem, but it is. As long as our purpose is to have a good time, to have soul-pleasure exceed soul-pain, God becomes merely a means to an end, an object to be used, never a subject rightfully demanding a response, never a lover to be enjoyed. Worship becomes utilitarian, part of a cunning strategy to get what we want rather than a passionate abandonment to someone more worthy than we.