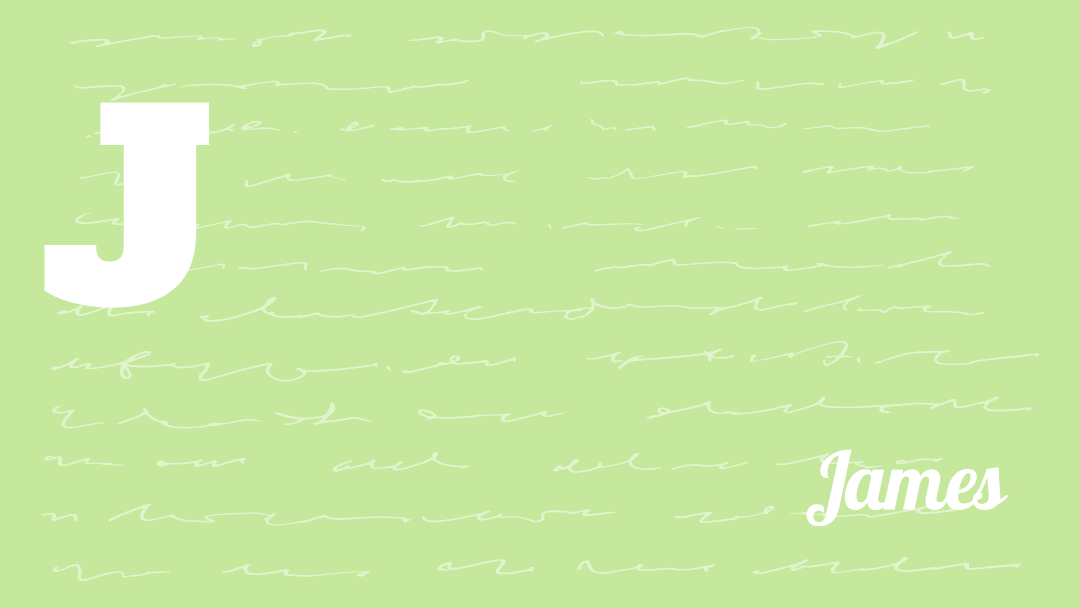 Just this past week I (Stu) was in worship in our downtown church and noticed ushers seating a couple of men who at least appeared to be homeless. Were they given the same treatment as those who came dressed in fine clothes? It appeared so, though obviously I can only see what happened on the outside, not on the inside.

This is a practical passage. It challenges us to take stock of our own actions in regards to how we treat the rich and the poor in our respective congregations. And yet at the same time, it would be a mistake to assume that this is simply “practical advice” for Christians. The advice James gives is in fact, very deeply tied to a theology of Christ’s kingdom and how that kingdom ought  to be manifested in communal life.

The main subject of our text–not showing partiality towards the rich, is in fact one application of James’ larger theme of his letter, that is, the “pure religion” of chapter 1, verse 27: “Religion that God our Father accepts as pure and faultless is this: to look after orphans and widows in their distress and to keep oneself from being polluted by the world.” (NIV)

According to James, his readers have allowed themselves to become bamboozled by the world as they show partiality to those who in fact are oppressing them. When they do this, they deny the true nature of the gospel, which proclaims that there is neither Jew nor Greek, slave nor free” (Gal.3:16) in Christ. In other words, the gospel flattens all relationships. It is radically egalitarian, especially compared to the world in which it was written. That is not to say that there is no such thing as leaders and followers in the kingdom, but even leadership is recast in the mold of Jesus, who taught a radical leadership style (servant leadership) in which the leader serves those who follow them.

Who exactly is James writing to in this letter? We don’t have a specific community to attribute James’ letter, like we do with many of Paul’s letters. But there are a number of clues that can help us get at least a small picture of who these people are.

To begin with, James writes his letter to the “twelve tribes in the dispersion.” What exactly does that mean? Most scholars would agree that this would be a group of Jewish Christians living outside of Palestine. We also know that the majority of the community are probably quite poor, as James makes quite clear throughout this passage. It is in fact, the preferential treatment that this community is giving to the rich that is such a concern for James. When this group does so, they undermine the very faith they have assembled to profess!

It is the poor, James argues in verse 5, whom God has chosen:

“Has not God chosen those who are poor in the eyes of the world to be rich in faith and to inherit the kingdom he promised those who love him?”

James describes, in somewhat harsh language, what happens when communities show partiality towards the rich: if you show favoritism, you sin and are convicted by the law as lawbreakers.

Lawbreakers, that seems kind of harsh! And what law is James referring to? The key is back in verse 8: “If you really keep the royal law found in Scripture, “Love your neighbor as yourself, you are doing right.” Douglas Moo, in the Tyndale Commentary series, describes it well:

The requirement laid upon those who hold the faith of our Lord Jesus Christ is no different from this basic Old Testament demand. A favouritism based on external considerations is inconsistent with faith in the One who came to break down the barriers of nationality, race, class, gender and religion. As Paul says, ‘Here there cannot be Greek and Jew, circumcised and uncircumcised, barbarian, Scythian, slave, free man, but Christ is all, and in all’ (Col. 3:11).’”

In other words, if our actions undermine the teaching of both the Old Testament (Torah) and Jesus’ teachings, then we are no longer living according to the gospel and we shall be judged by a different law: “For whoever keeps the whole law and yet stumbles at just one point is guilty of breaking all of it. For he who said, “You shall not commit adultery,” also said, “You shall not murder.” If you do not commit adultery but do commit murder, you have become a lawbreaker.”

And this brings us to the final section of our passage, the famous “faith without works is dead” passage that is so often contrasted with Paul’s teaching on salvation by grace through faith. How do we, as preachers committed to a theology of justification based on grace through faith, teach this text?

Are they at complete odds? I don’t think they are, actually, because I think Paul and James are dealing with quite different topics. In places like Ephesians and Romans, Paul is trying to help his audiences understand that they could never earn their salvation, that it is, as the Greek word for grace (charis) denotes, a “free gift,” something that we receive rather than earn.

James, on the other hand, is primarily concerned with living out our faith. He’s not dealing with the source of our salvation, but, in many ways similar to Paul’s letters, wants to see his flock living according to the gospel, in contradistinction to the world. When the rich are given preferential treatment and the poor are scorned, something has gone radically haywire and requires resolution, otherwise the “center cannot hold.”

If the community of faith is not acting in accordance with Jesus’ teachings, then it will cease to be a Christ-centered community at all. And so James speaks with an urgency, calling on this community to repent and return to the pure religion found in Christ’s teachings and actions. These teachings are centered on the radical, upside-down kingdom, where the poor are rich in faith, where the blind see, where the lost are found.

And so Lord, help us to be a people known for the ways in which we live out our faith by loving and serving all people, even those who in the world’s eyes have little to offer us. By treating them with dignity and respect, we demonstrate that a different kind of kingdom is at work in this world. It is not a kingdom of tit-for-tat, where relationships are seen as commodities for exploitation and advancement, but rather it is a world where we see the value in each human life, no matter their circumstances.

To me, a faith in Jesus Christ that is not aligned with the poor…it’s nothing.

In her short story, Revelation, Flannery O’Connor describes a woman sitting in a Doctor’s office, gossiping away without concern for who hears her questionable commentary:

This woman says to herself and to anyone who will listen, “I thank you God that you didn’t make me and my husband Claude black. But if the choice was between making me black and making me white trash, God, I would rather you make me black. I couldn’t bear to be white trash.” And at about that time a young woman also in the waiting room whacks her over the head with a book.

As a result of the impact she becomes dizzy and is carried off to the hospital. At the end of the story she has a dream, a revelation, that there is a great band of folk dancing their way up the ladder to heaven—prostitutes and thieves and blacks and white trash and there, at the end, are she and her husband Claude.

The kingdom of God turns the Darwinist narrative of the survival of the fittest upside down (Acts 17:6–7). When the church honors and cares for the vulnerable among us, we are not showing charity. We are simply recognizing the way the world really works, at least in the long run.

The child with Down syndrome on the fifth row from the back in your church, he’s not a “ministry project.” He’s a future king of the universe. The immigrant woman who scrubs toilets every day on hands and knees, and can barely speak enough English to sing along with your praise choruses, she’s not a problem to be solved. She’s a future queen of the cosmos, a joint-heir with Christ.… The first step to cultural influence is not to contextualize to the present, but to contextualize to the future, and the future is awfully strange, even to us.