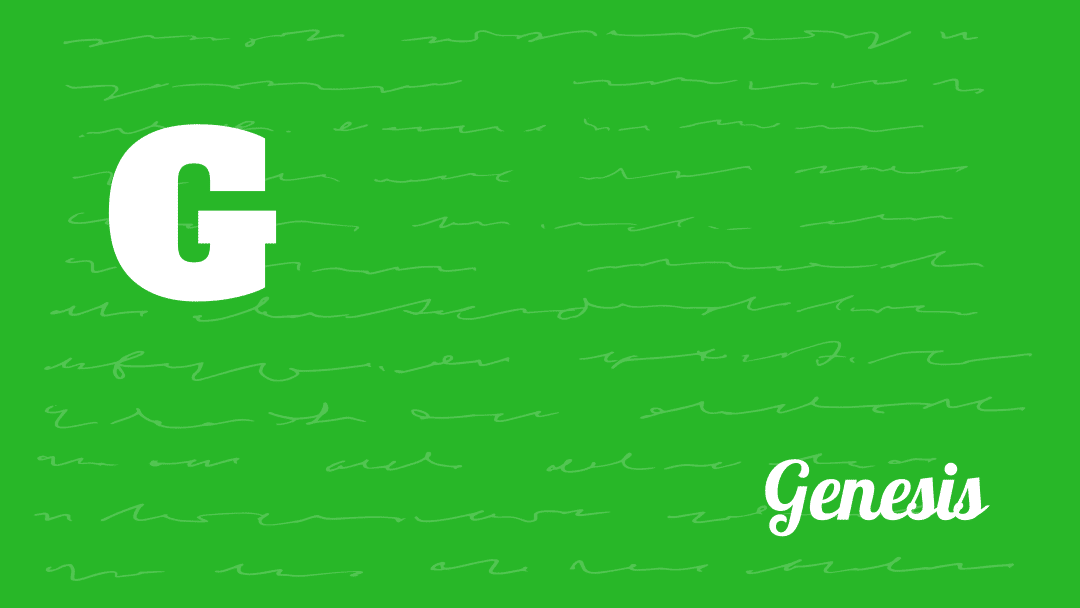 How did we get here? When relationships disintegrate and fall apart it is a fair question to ask. The question may come on the brink of disaster or sadly, more often as a postmortem analysis of a relationship too far gone for repair. Like a pebble thrown up by the wheel of a semi truck into the windshield of an oncoming car, the decision of Adam and Eve to eat of the Tree of the Knowledge of Good and Evil, put the chip into God’s relationship with humanity that over time would shatter the windshield of communion with God. From beautiful promise to broken peace, humanity moves yet further away from their Creator by every decision to choose self over him. So, is there any question how we got to Genesis 9?

God created something beautiful ex nihilo, from nothing. He took that which the Hebrew describes as tohu v’bohu, empty and void, and from it brought color, clarity, character, organization, and life. The pinnacle of his creative process was the formation of man and woman in his own image after which he looked at all he created in Genesis 1:31 and, “behold, it was very good…”

However, God had blessed Adam and Eve and said: “Be fruitful and multiply and fill the earth and subdue it, and have dominion over the fish of the sea and over the birds of the heavens and over every living thing that moves on earth.” But they crossed the boundary line that God had set for them, and were banished from Paradise. While God continued to walk with them, humanity’s corruption exponentially rose, from the murder of Abel at the hands of his brother Cain to a cumulation of corruption that culminated in God’s remorse over his creation. Genesis 6:6-8 expresses this sorrow,

The Lord regretted that he had made man on the earth, and it grieved him to his heart. So the Lord said, “I will blot out man whom I have created from the face of the land, man and animals and creeping things and birds of the heavens, for I am sorry that I have made them.” But Noah found favor in the eyes of the Lord.

With God’s destructive deluge in Genesis 7 & 8 we see an artist dissatisfied with his workmanship, not because of any inherent flaws in his design, but because his creation has taken on a purpose of its own, independent of its Creator. The good, in fact, the very good creation has been misappropriated for ill advised use.

While God’s resulting decision is much more cataclysmic than an artist tearing his canvas up in a fit of frustration, it is no less apt to describe God’s disappointment at the work of his hands. Perhaps a more accurate metaphor in our day of technological sophistication in AI (Artificial Intelligence), the bots had taken on a mind of their own beyond the scope delineated by their designer. Something had to be done.

As mentioned, the text for this day finds the damage beyond repair, at least, beyond human repair, and it required a greater power. God never works without a contract. In Genesis 9:8-17, God initiates a covenant with Noah and his offspring to never again destroy the earth and all living flesh, as he had with the flood. The reflective light in the sky, the rainbow, will be God’s designated symbol of his promised covenant as a reminder to himself of his commitment to preserve his creation as he declares in Genesis 8:21-22,

“I will never again curse the ground because of man, for the intention of man’s heart is evil from his youth. Neither will I ever again strike down every living creature as I have done. While the earth remains, seedtime and harvest, cold, and heat, summer and winter, day and night, shall not cease.

Genesis 9 represents a re-creation by God of the work of his hands, a renewed blessing of humanity and a commitment that God would remain true to his word to never destroy what he had once again reformed, reconstituted, and restored despite the ingloriously sinful heart of humanity to seek self over God.

Our lectionary text describes the first formal berit (covenant) of God with humanity, in general, through Noah, his chosen representative. The theme of God’s covenantal initiative will continue throughout the book of Genesis and lay the foundation for a covenant of blessing between God and Abram in Genesis 17:4-7,

God’s covenantal commitment moves from refraining to destroy to promising to bless. It will climax in a fulfilled promise to Abraham to bless the nations through the life, death, and resurrection of the incarnate God in Jesus, the beloved Son of the Father.

Paul’s treatise on justification by faith, the covenant promise to Abraham, death in Adam, life in Christ, and freedom in the spirit as heirs with Christ set forth in Romans 4-8 is a helpful reflection on how God’s destruction of humanity leads to God’s re-creation and redemption of humanity through his faithful promise. While God’s covenant promise to Noah and his descendants to never again destroy the earth stops short of his future promise to bless and redeem, it provides a helpful contrast to the restorative blessing through Jesus.

As I contemplate the intersection of this text with our contemporary life, I can see the waxing crescent moon shining the radiant reflection of the sun down upon the Southern California landscape as pinkish and purple hues yet linger in the southwest direction of the Pacific, just a short drive from our home. Despite the chaos of a pandemic and any political unrest caused by the transition of power, I am reminded of God’s promise in Genesis 8, “While the earth remains, seedtime and harvest, cold and heat, summer and winter, day and night, shall not cease.” Certainly the hands of humanity may damage the earth intentionally or unintentionally by our lack of care, but God promises to sustain it and to preserve us. Yet, the intention of man’s heart still remains less than good. The theological assertion of scripture is that all humanity is depraved in heart, soul, and mind and in need of restoration.

When I consider the promise that God made to Noah, I am reminded that although God decrees no longer to destroy, corruption and decay are still known to man. The beauty of the sunset belies the deceptiveness of the human heart and the passing of days. My dear friend who recently underwent open heart surgery for a faulty heart valve is a two-timer and depending upon his own length of days, may very well be a three-timer because of a physical defect from birth. This recent surgical procedure for him was intense. He underwent several electrical cardioversions to reset the arrhythmia of his heart. Our situation is not dissimilar.

Our physical bodies are bound by limits, vulnerable to disease and ultimately to death. Our spiritual selves are equally prone to destitution. The spiritual hearts that we possess have their own faulty valves that need replacing. Many of us find ourselves, like my friend, needing a spiritual rendering of an electrical cardioversion to reset the arrhythmia of our souls. The beauty of the Gospel message is that God gives us a spiritual shock through the restorative work of Jesus on the cross. When my days are less than sunny and the gloom is of my own making, my relationship with Christ provides the needed surgical restoration to put me right again.

One of the places for heart restoration that the preacher may wish to address during this season is the way in which we interact with those with whom we disagree, especially within the church. The recent political season has revealed the corruption of the human heart. I myself have had to repent of the way in which I have perhaps mostly unintentionally, but sometimes intentionally, degraded those with whom I disagree. I have had to ask along with Jesus’ challenge to the Ephesian Church in Revelation 2, have I, too, “forgotten my first love?”

Christ is to be our first love. From this first order priority is to flow a love for his church and his creation. Jesus himself told his disciples in John 13:35, “By this everyone will know that you are my disciples, if you love one another.” As I reflect on God’s promise to Noah that he would no longer destroy us because of our depraved hearts, I am reminded that he goes one beyond that to restore their defectivity, “For if by the trespass of the one man, death reigned through that one man, how much more will those who received God’s abundant provision of grace and the gift of righteousness reign in life through the one man, Jesus Christ!” (Romans 5:17).

We’re in the presence of a good story when the flaw that shatters shalom is also the doorway to redemption… Whether it be our own flaw or the sin of others, God uses the raw material of sin to create the edifice of his redeemed glory. The point cannot be overemphasized: your plight is also your redemption. The Bible assumes that its stories are also our story… We are Abraham, Isaac, and Jacob. Their stories are a paradigm of our own. Each of us is called, redeemed, and exiled – again and again.”

Dan B. Allender, To Be Told: Know Your Story, Shape Your Future

Paul described his work as a ‘ministry of reconciliation’ and his gospel as a ‘message of reconciliation’. He also made it quite clear where this reconciliation comes from. God is its author, he says, and Christ is the one through whom he brings it about. ‘All this is from God, who reconciled us to himself through Christ.’… But what does this ‘reconciliation’ mean?

The answer is that it indicates either an action by which two parties in conflict are brought together, or the state in which their oneness is enjoyed and expressed. Paul says that this reconciliation is something that we have received through our Lord and Saviour Jesus Christ. We have not achieved it by our own efforts; we have received it from him as a gift. Sin caused a separation between us and God; the cross, the crucifixion of Christ, has brought us back together.

Sin made us enemies; the cross has brought peace. Sin created a gulf between us and God; the cross has bridged it. Sin broke the relationship; the cross has restored it. To put the same truth across in different words, as Paul does in this letter to the Romans, ‘The wages of sin is death, but the gift of God is eternal life in Christ Jesus our Lord.’