Opening Prayers/Prayers of Adoration on The Cross 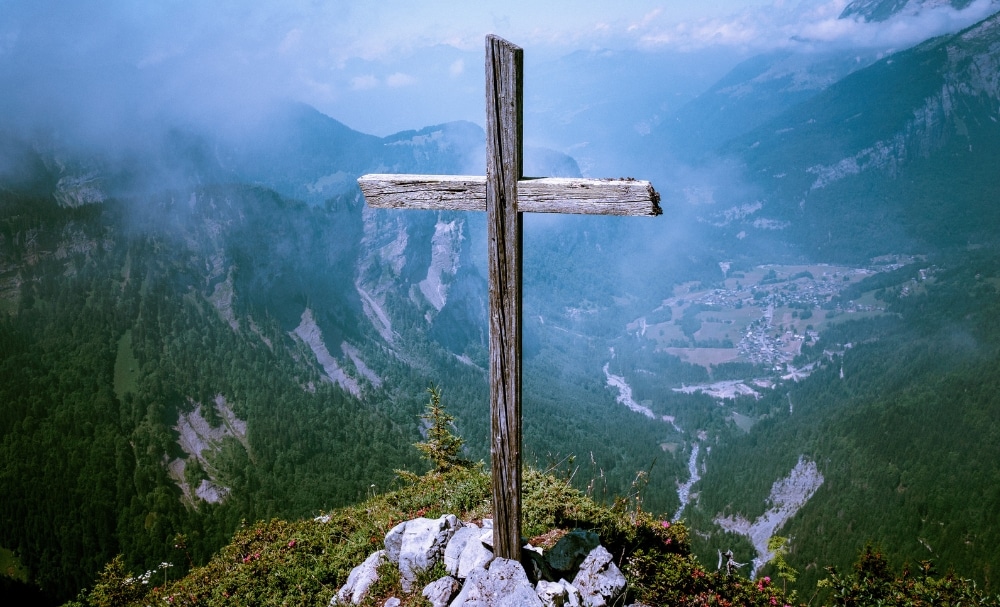 Tell me dear tree on which my Lord, my blessed Lord did hang,

How could you hold the spotless Lamb, be party with the gang?

That cheerless day, that shadowy hour, my blessed Savior died,

to free my soul for heavenly things, O tree, you must have cried.

a green and growing tree, alive, but your whole self did give

to be the instrument of death, to be the very tree

to be the place for Christ to die upon dark Calvary

Wait! Do I hear a shout of joy from somewhere deep within?

Your duty done; the battle won so all the world might win.

How beautiful your love for Him. He sewed it long ago

You bore the weight. You took the stain, and now the world must know

The tree of death felt every wound, felt all the pain and loss.

She loved her maker through it all, was glad to be His cross.

Teach me dear tree on which my Lord, My precious Lord did die

To treasure grueling duties done so Christ is lifted high

You can sing this poem to tunes with this meter: 86.86 double (CMD)

The God who breathed this world alive

And sustains it day by day,

Whose hands flung stars into space

And controls our destiny,

The God who filled the ocean depths,

And set tides on their way,

Who caused mountains to be raised up,

And rainbows to display,

Says, “I have called you by name, you are mine.”

The God who made the fertile earth

And seed within to sow,

And the early morning dew,

Says, “You are precious in my sight.”

I pray to God the Father, God the Son,

And to God the Holy Spirit,

In Persons three and one,

In essence simple and triune,

Suspending the earth above the waters,

Hanging the upper air with stars,

That he may be favorable to me, a sinner,

Who righteously justifies all who err,

May God be blessed for ages. Amen.

Taken from “The Prayers of Moucan”, in Celtic Spirituality, Ed, Oliver Davies.

you are the power behind all things:

behind the energy of the storm,

behind the heat of a million suns.

you are the power behind all minds:

behind the ability to think and reason,

behind all understanding of the truth.

you are the power behind the cross of Christ:

behind the weakness, the torture, and the death,

we worship and adore you. Amen.

God of light and truth,

you are beyond our grasp or conceiving.

Before the brightness of your presence

the angels veil their faces.

With lowly reverence and adoring love

we acclaim your glory

and sing your praise,

for you have shown us your truth and love

in Jesus Christ, our Savior. Amen

The Service for the Lord’s Day. The Worship of God: Supplemental Liturgical Resource 1. Presbyterian Church (U.S.A.), 1984

Bless Christ Through Whom All Things Are Made

Bless Christ through whom all things are made.

Join seen and unseen in their praise

of One who both creates, sustains

who goes before, in justice reigns.

Who makes the lion and the lamb,

the farthest star, the smallest hand,

dominions, rulers, and their pow’rs,

the steadfast mount, the fleeting hours?

Who made the ore for blood-soaked nails?

Who made the thorns and whipping tails?

Who made the sun that would not shine

and made the tree on which Christ died?

Who makes the waters of our birth?

Who makes the dust where we return?

Who makes the way for us to die

and rise to everlasting life?

Bless Christ though whom all things are made.

Join seen and unseen in their praise

of One who both creates, sustains

who goes before, in justice reigns.

Bless Christ, Through Whom All Things Are Made © 2000 Lisa Ann Moss Degrenia, www.revlisad.com